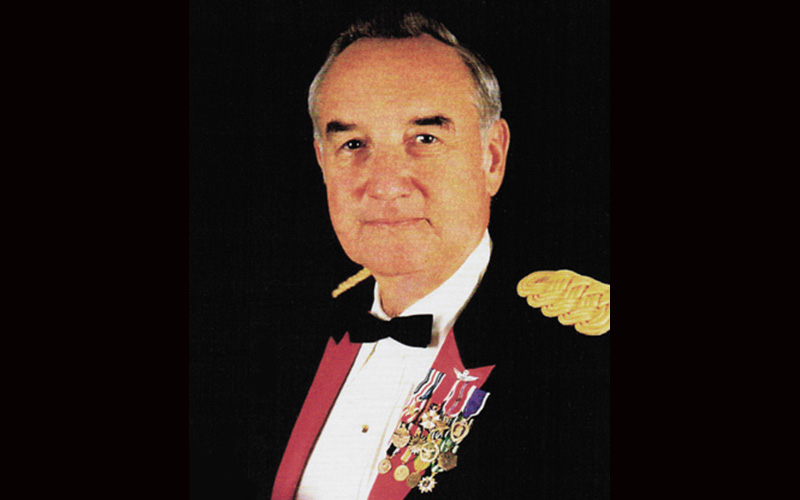 Quin Herlik was born in 1932 in Green Bay, Wisconsin. He enlisted in the U.S. Army Reserve on September 10, 1954, and was commissioned a 2nd Lt of Artillery through the Army ROTC program at St. Norbert College, Wisconsin, on June 5, 1955. Lt Herlik went on active duty beginning November 18, 1955, and after completing the Field Artillery Officer Basic Course at Fort Sill, Oklahoma, he was assigned to the 216th Field Artillery Battalion at Darmstadt, West Germany, from March 1956 to April 1959.

After completing additional training at the U.S. Army Air Defense Center at Fort Bliss, Texas, 1LT Herlik served with the 5th Missile Battalion of the 55th Artillery at Fort Leavenworth, Kansas, from August 1959 to January 1961. He then attended Fixed Wing Aviator training at Fort Rucker, Alabama, and was awarded his Aviator Badge in November 1961, having qualified as an O-1 Bird Dog and U-6 Beaver pilot. His first aviation assignment was with the U.S. Army Special Warfare Center at Fort Bragg, North Carolina, from November 1961 to March 1964, followed by service with the 73rd Aviation Company at Nha Trang, South Vietnam, from April to December 1964, and then with the 7th Aviation Platoon at Da Nang, South Vietnam, from January to April 1965.

Maj Herlik next served with the U.S. Army Weapons Command at Rock Island, Illionis, from May 1965 to May 1966, and then as Chief of Liberty Army Airfield Operations with the U.S. Army Aviation School Element at Fort Stewart, Georgia, from May 1966 to March 1968. He then returned to Southeast Asia where he served as Executive Officer of the 138th Aviation Company at Da Nang from May to July 1968, followed by service as Commander of the 146th Aviation Company at Saigon, South Vietnam, from August 1968 until he was shot down in his RU-1 Otter reconnaissance aircraft in Cambodia and was captured and taken as a Prisoner of War on February 12, 1969. President Nixon managed to get him and the other members of his aircrew released on March 11, 1969. He then returned to the U.S. and served on the staff of Headquarters U.S. Army Air Defense Command at Ent AFB, Colorado, from May 1969 to January 1972, and then on the staff of Headquarters Central Army Group at Seckenheim, West Germany, from February 1972 to June 1973.

Col Herlik served as Commander of the 5th Artillery Group at Buren, West Germany, from July 1973 to July 1975, followed by service on the Operations Directorate (J-3) of the Joint Chiefs of Staff as the Combat Center Operations Chief on the National Emergency Airborne Command Post (NEACP) at Andrews AFB, Maryland, from August 1975 to July 1977. His next assignment was on the staff of Headquarters U.S. Army Element of the North American Aerospace Defense Command stationed at Elmendorf AFB, Alaska, from July 1977 to July 1981, and then as President of the U.S. Army Physical Evaluation Board at Fort Gordon, Georgia, from August 1981 until his retirement from the Army on December 31, 1985. Col Herlik wears the Master Army Aviator Badge, and accumulated 4,268 flying hours during his Army career, including 912 flying hours in combat during his two tours in Southeast Asia.

By direction of the President, under the provisions of the Act of Congress approved 9 July 1918, a Silver Star for gallantry in action is awarded to: Lieutenant Colonel Querin E. Herlik (then Major), Artillery, United States Army, who distinguished himself by heroism involving voluntary risk of life in the Republic of Vietnam on 12 February 1969 and during the ensuing period of captivity that ended on 12 March 1969. On 12 February 1969, while serving on a classified airborne mission over the Republic of Vietnam, the plane in which Colonel Herlik was pilot came under hostile fire and was forced to land in hostile territory. Colonel Herlik, knowing the potential loss to the United States effort in Vietnam if the enemy came into possession of the aircraft, took up a defensive position near the aircraft. In the ensuing intense fire fight, Colonel Herlik took a determined stand with a small caliber weapon. He and his fellow crew members fought valiantly until they were sure that the sensitive aircraft had been destroyed. After the aircraft’s destruction, they continued to fire at the enemy in the hope that the numerically superior force could be held at bay until rescue attempts could be undertaken. Finally, out of ammunition, Colonel Herlik and his fellow crew members were captured. Colonel Herlik, after capture, resisted all interrogation concerning his mission or activities aboard the aircraft. By his courageous action and humanitarian regard for his fellow man, in the dedication of his service to his country, Colonel Herlik has reflected great credit upon himself and the United States Army.