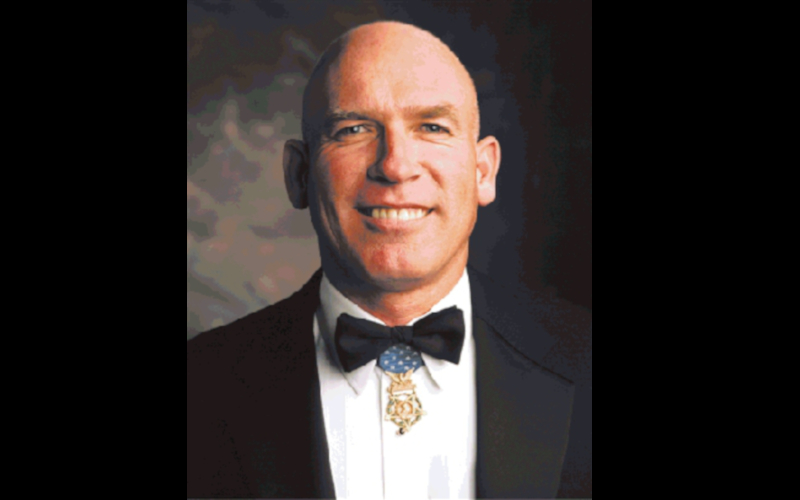 For conspicuous gallantry and intrepidity in action at the risk of his life above and beyond the call of duty. Sgt. Lemon (then Sp4), Company E, distinguished himself while serving as an assistant machine gunner during the defense of Fire Support Base Illingworth. When the base came under heavy enemy attack, Sgt. Lemon engaged a numerically superior enemy with machine gun and rifle fire from his defensive position until both weapons malfunctioned. He then used hand grenades to fend off the intensified enemy attack launched in his direction. After eliminating all but 1 of the enemy soldiers in the immediate vicinity, he pursued and disposed of the remaining soldier in hand-to-hand combat. Despite fragment wounds from an exploding grenade, Sgt. Lemon regained his position, carried a more seriously wounded comrade to an aid station, and, as he returned, was wounded a second time by enemy fire. Disregarding his personal injuries, he moved to his position through a hail of small arms and grenade fire. Sgt. Lemon immediately realized that the defensive sector was in danger of being overrun by the enemy and unhesitatingly assaulted the enemy soldiers by throwing hand grenades and engaging in hand-to-hand combat. He was wounded yet a third time, but his determined efforts successfully drove the enemy from the position. Securing an operable machine gun, Sgt. Lemon stood atop an embankment fully exposed to enemy fire, and placed effective fire upon the enemy until he collapsed from his multiple wounds and exhaustion. After regaining consciousness at the aid station, he refused medical evacuation until his more seriously wounded comrades had been evacuated. Sgt. Lemon’s gallantry and extraordinary heroism, are in keeping with the highest traditions of the military service and reflect great credit on him, his unit, and the U.S. Army.