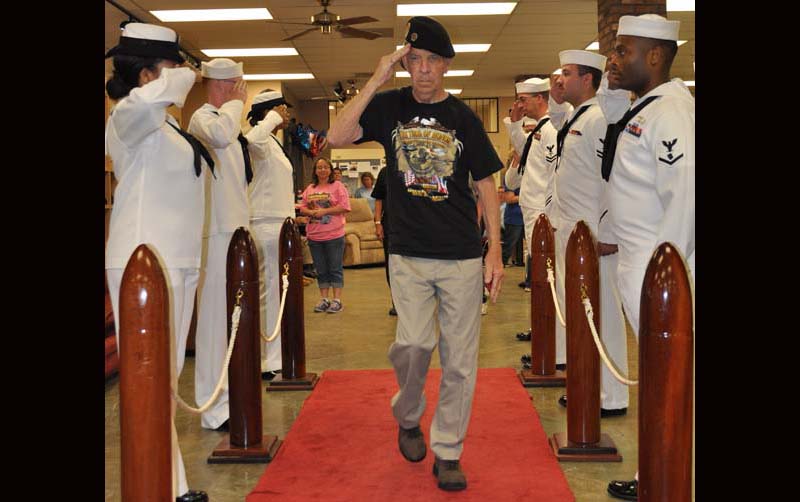 Awarded for actions during the Vietnam War
The President of the United States of America takes pleasure in presenting the Navy Cross to Gunner’s Mate Third Class David R. Larsen, United States Navy, for extraordinary heroism on 2 August 1969 as a member of River Division 593, River Patrol Flotilla FIVE, Task Force 116 (TF-116), while serving with friendly foreign forces engaged in armed conflict against North Vietnamese and Viet Cong communist aggressor forces in the Republic of Vietnam.

Petty Officer Larsen was serving as a gunner’s mate aboard River Patrol Boat 775 (PBR-775) which was part of a two-boat night waterborne guard post stationed on the upper Saigon River. Operating in conjunction with the patrol, a six-man ambush team, which was providing bank security for the guard post, engaged four enemy soldiers who were part of an estimated 35 to 50-man force that returned the contact with accurate rocket fire, killing or critically wounding all but one member of the six-man ambush team. One man from the team managed to call for the PBR crewmen’s help. Armed with a machine gun and several ammunition belts, Petty Officer Larsen hastened to the assistance of the ambush team.

As he led his small force ashore, he saw three enemy soldiers about to overrun the friendly position. He immediately rushed toward them, firing his machine gun, and single-handedly turned back the enemy assault, killing at least one of the enemy. Petty Officer Larsen then maintained a one-man perimeter defensive position and, although under continuous enemy fire, succeeded in discouraging further enemy attacks until additional help arrived. Later, armed with three different weapons, Petty Officer Larsen was the first man to take his post on the perimeter established to provide security for the medical evacuation helicopter.

By his extremely courageous one-man assault in the face of direct enemy fire, Petty Officer Larsen was responsible for saving the lives of three fellow servicemen, and for protecting his shipmates as they administered aid to the wounded. His valiant and inspiring efforts reflect the highest credit upon himself and the United States Naval Service.